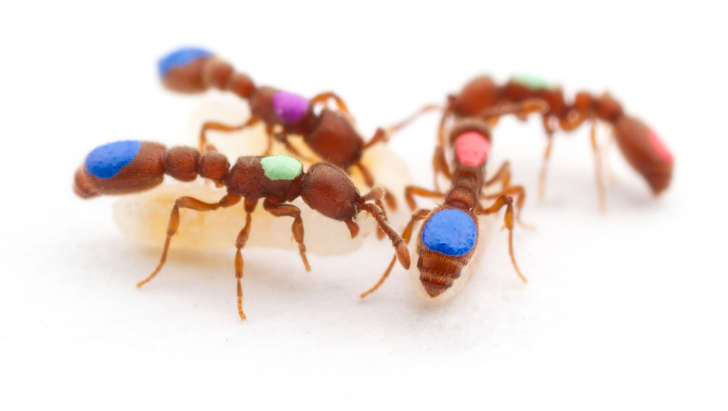 Despite what you might’ve seen in 1950s monster movies, it’s difficult to raise mutant ants. For years biologists have altered the genetics of organisms as varied as mice and rice. Mutant fruit flies are a laboratory staple. But ants’ complex life cycle hampered efforts to grow genetically engineered ants — until now.

Claude Desplan, a New York University biologist and an author of one of the studies, said that, as far as he could tell, these ants are “the first mutant in any social insect.”

Ants have complex social roles, even though members of a colony are genetically very similar. Females may be egg-laying queens or sterile workers, colony cleaners or fierce soldiers. Males, who are little more than sperm-delivery systems with wings, appear only seasonally. To ensure the mutant genes carry on, “you need to go through the queen,” Desplan said. “It is not so easy to make queens.”

“There’s a lot of interesting biologic questions that you can study with ants that you can’t study with fruit flies or even mice,” said Rockefeller University biologist Daniel Kronauer, an author of the other mutant-ant study. If you throw a thousand fruit flies in a bucket of dirt, maybe they’ll fight or copulate, he said. But that’s about it. Do the same with ants and they’ll set to work digging, caring for broods and foraging.

What’s more, the insects are prime targets for studies of epigenetics, the external factors that toggle genes on and off. “Ants are amazing because with the same genome you can be a queen, or a worker, or another class of worker, or a soldier,” Desplan said.

Desplan’s research group chose to study a species of jumping ant found in India, Harpegnathos saltator, because all of these ants are potentially fertile. Before laying eggs, though, the workers have to become pseudo-queens. (The scientific term for a pseudo-queen is a “gamergate” — no relation to the anti-feminist video game hullabaloo circa 2014.) If a jumping-ant colony loses its queen, the workers go through a gantlet of ritualized antenna-flailing duels. The victor transforms into a pseudo-queen.

Kronauer and his colleagues, led by Rockefeller University graduate student Waring Trible, studied clonal raider ants, Ooceraea biroi. Unlike most ants, the raider ants reproduce asexually, through parthenogenesis. Popularly called virgin birth, it’s a phenomenon seen in some snakes, lizards and sharks. The offspring end up as clones of the females. For both species, the desired result of genetic alteration was the same: creating mother ants that gave birth to future generations of mutants.

Both research groups mutated their ants in the same way. Using the CRISPR-Cas9 technique, with bacterial molecules acting like scissors to snip out genes, the scientists knocked out a crucial component of the ant’s odor receptors.

Pheromones, the odors by which ants communicate, are their social medium. Though there are hundreds of olfactory genes in ants, deleting one particular gene — called orco, for odorant receptor co-receptor — effectively renders almost the entire ant olfactory system useless.

Removing every individual odor gene would be “essentially impossible,” Kronauer said. But the power of orco to “take out the whole family” of olfactory genes makes it an obvious candidate for manipulation. (It’s why both research groups independently decided to focus on deleting the gene.) The insects lost about 90 percent of their olfaction, Desplan said.

The behavior of the mutants changed dramatically. The Indian jumping ants wandered away from the colony and wouldn’t forage. If Desplan isolated a mutant jumping ant, the ant still became a fertile gamergate. But these pseudo-queens laid very few eggs and were poor mothers. And if the mutants belonged to a colony that lost its queen, they didn’t partake in the antennae duels. Instead, they only twitched their antennae when alone, as if shadowboxing.

The clonal raider ants that couldn’t sense pheromones acted strangely, too. Normally, these ants detest the smell of Sharpie markers. But the mutants marched right over lines drawn in Sharpie.

Like the jumping ants, the Ooceraea biroi mutants became antisocial. “Suddenly these ants aren’t really social any more. They wander off, they don’t join the colony,” Kronauer said. “They just walk around.” Nor did they follow the pheromone trails their brethren left.

Stranger things happened, too. One particularly odd loner crept into a colony, stole off with an egg and began to groom it with her antennae. All of a sudden she startled. There was no cause for alarm, but the flood of warning pheromones she released sent the rest of the non-mutant colony into a tizzy, Kronauer said.

Now that scientists know they can alter ant behaviors through their genes, Kronauer plans to study the way colonies divide their labor.

Imagine two people living in an apartment. As the dishes pile up, the roommate with a lower threshold for dirty plates begins to wash dishes more often. In the parlance of a biologist observer, that roommate “emerges as a dishwashing specialist.” The old research methods would be to alter the external cues — the equivalent of removing the dishwashing machine and seeing what happens. Through genetic manipulation, Kronauer plans to directly change an ant’s internal thresholds.

Desplan is interested in the way ants alter their longevity, in addition to sensory perception. Workers live to about seven months old. But workers that become pseudo-queens live for four years. That’s like one human twin living to age 85 and the other to age 550. “Expanding by a factor of 10 is unheard of,” Desplan said.

Workers who become pseudo-queens turn back to workers once they’re exposed to queen pheromones. These former queens die within months. That means there must be a reversible genetic switch that controls the ant life span.

Other scientists have taken note of the mutant ant models, Kronauer said, including experts who study honeybees. “People are very excited,” he said, and they have asked whether his lab could help establish a similar protocol in other species.

Research such as this opens the door for new model organisms, in Desplan’s view. If the traditional bioscience method is to ask many questions of the same organism — such as mice or fruit flies — then genetic engineering techniques allow biologists to ask very specific questions to an animal that fits their needs.

If you want to model communities, look to ants. “Even mice don’t have very sophisticated behavior,” Desplan said.

Some entomologists became ant experts because they loved ants. For Desplan, his was a more pragmatic affinity. He has worked with insects as varied as fruit flies, wasps and butterflies. And now mutant ants.

“We became ant people because we needed to,” he said, “not because we were born ant people.” And, if these model mutants catch on the way Desplan and Kronauer predict, expect the ranks of ant people to swell.

Soon you can track status of interest subsidy application PMAY

SBI Online user? You won’t be able to do net banking if you don’t submit this detail